A strata title is used when individuals own part of a property usually called a ‘lot’. This is generally an apartment, unit or townhouse complex which shares ownership of common property including driveways, foyers and gardens.

The ownerships are combined through a legal entity called the owners corporation, commonly referred to as a body corporate. Strata title can include residential and commercial properties including units, apartments, townhouses, retail stores, retirement villages and more.

Strata title accounted for 54 per cent of BMT schedules ordered in 2017/2019, up from 49 per cent during the previous financial year.

BMT review the property’s entitlements within the Strata Plan, Building Unit Plans and Plan of Subdivision to determine the exact percentage of ownership and capture every deduction.

When determining the value of common property assets for depreciation purposes, the value is governed by the owner’s interest in the asset. As a result, these assets often fall into the low-value pool or qualify for an immediate write-off. This allows Quantity Surveyors to apply accelerated depreciation rates to most assets found in common areas.

The low-value pool allows investors to group qualifying assets into an accelerated depreciation pool, meaning greater deductions can be claimed sooner. In strata title, if an owner’s interest in a common property asset is less than $1,000, this asset can be pooled and claimed at a rate of 18.75 per cent in the year of purchase and 37.5 per cent each year thereafter.

If an owner’s interest in an asset is less than $300, the asset qualifies for an immediate write-off and the full amount can be claimed in the first year.

As common property assets are depreciated based on an investor’s portion of ownership, more assets fall into the low-value pool or qualify for immediate write-off. This means owners can benefit from improved cash flow sooner.

The below example displays a selection of common property assets the owner of a $595,000 two-bedroom, two-bathroom apartment could claim. It highlights the first and second year deductions based on the apportioned cost of the assets shown. 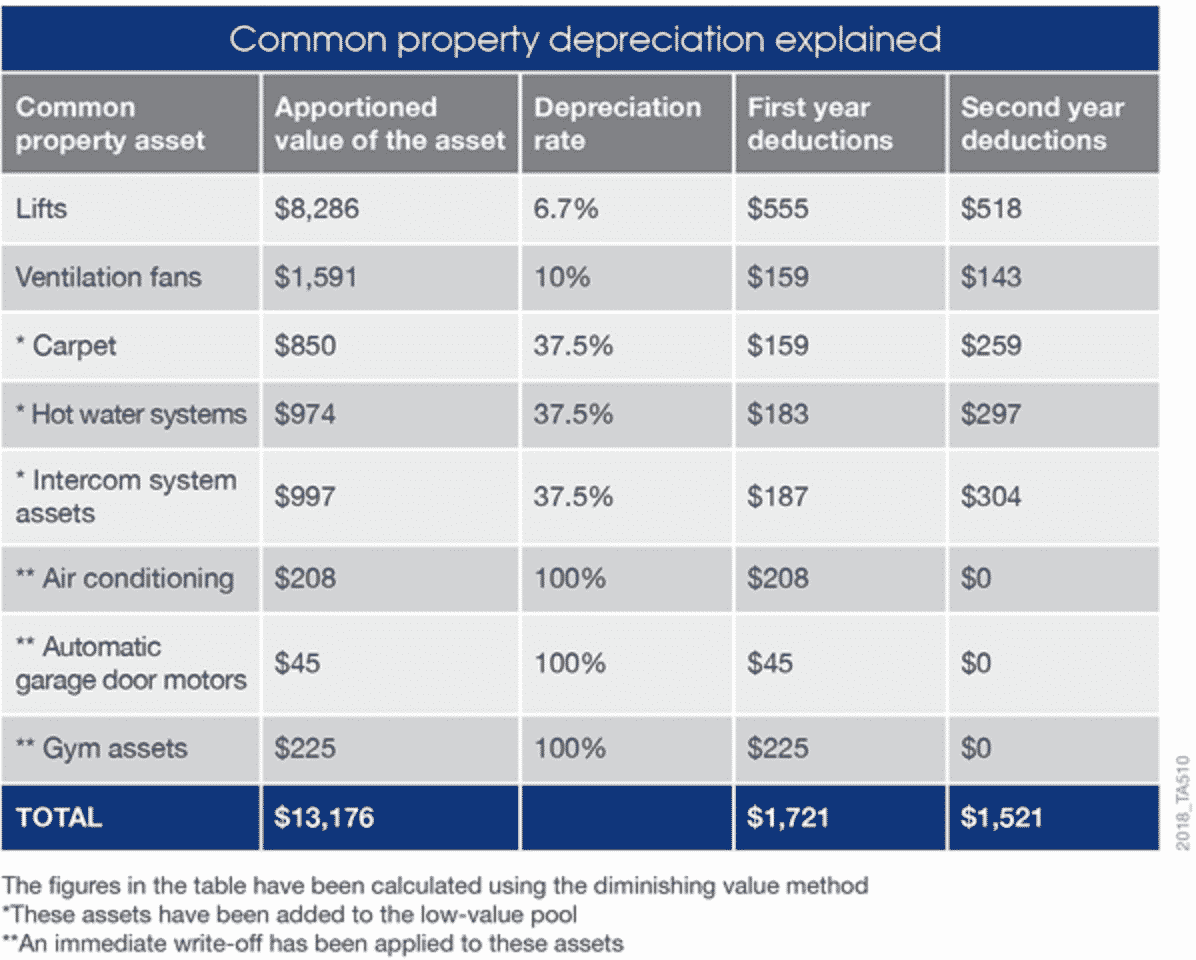 The owner can claim $1,721 in deductions from common property assets in the first year alone. They can also claim $1,521 the following year.

The gym assets in the example have an apportioned value less than $300, meaning the investor can claim the full amount in the first year. This is also the case for the air conditioning and automatic garage door motors.

The owner’s portion of common property carpet, hot water systems and intercom system assets have a value less than $1,000, qualifying them to be grouped in the low-value pool with accelerated depreciation.

As all strata title properties contain different assets and have unique ownership arrangements,it is important deductions get apportioned correctly. To ensure accuracy it’s best to obtain a depreciation schedule from a specialist Quantity Surveyor.

Developers can obtain a free tax depreciation estimate to inform potential buyers of the strata-title depreciation benefits. To request an estimate, visit www.bmtqs.com.au/estimate.